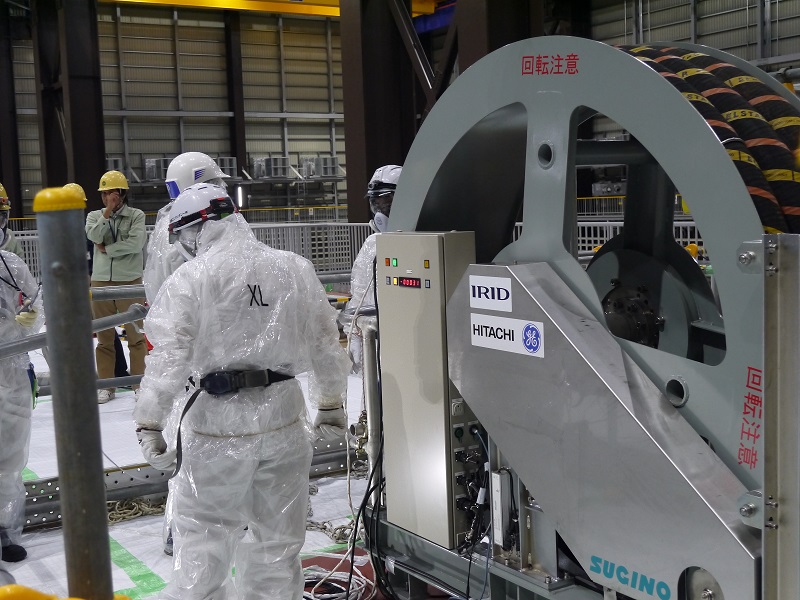 IRID is engaged in ongoing development of technology for repairing leakage points in the Primary Containment Vessel (PCV) under a project sponsored by the Ministry of Economy, Trade and Industry (METI) for the FY2016-2017 period towards the decommissioning of the Fukushima Daiichi Nuclear Power Station.

As part of this project, IRID commenced testing using “a full-scale mock-up test device” to establish technology for repairing water leakage points in the lower part of the PCV.
The first workability verification test for strengthening Suppression Chamber (S/C) support columns was conducted in November 2016.

*This testing device simulates vent pipes, the S/C and torus room wall in the lower part of the Fukushima Daiichi Unit 2 PCV. The testing device is of a full-scale size, but represents a 1/8 portion of the circular S/C.

●Testing overview [Technology for strengthening S/C support columns]
R&D for water stoppage technology through injecting filing inside the S/C is being undertaken in order to retrieve fuel debris. The total weight of the S/C is expected to increase due to this injecting filling. IRID is therefore making efforts to develop technology for seismic strengthening of S/C support columns through injecting reinforcement materials in the lower part of the S/C.

Workability verification and pouring (concrete) testing will be conducted for each technology.
A series of full-scale tests for development of construction methods are planned for completion by the end of the next fiscal year.

＊We expect to provide updates on the status of these tests accordingly when the test schedule is confirmed.