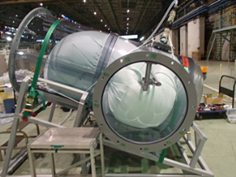 The investigation and repair of primary containment vessel (PCV) leak locations are indispensable for water filling according to the fuel debris retrieval plan in the “Mid- and-Long-Term Roadmap” and for preventing contaminated water levels from increasing.
The progress status of the R&D project for the “inspection/repair of leaking locations using PCV lower-section repair technology” in the subsidy project of the Japanese Ministry of Economy, Trade and Industry (METI) is as follows:

For the water cutoff material, a “water stoppage test” was conducted using a one-tenth scale model to fill the gap between the vent piping and the sealing supporting material. In this test, the sealing capability in water flow, the suitable material composition for stoppage, and the appropriate injection speed were confirmed. Additional feasibility tests are planned based on the findings from these tests.