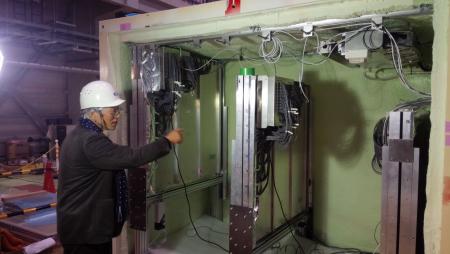 Work on the construction of measuring equipment in preparation for testing of muon technology is currently underway. It is hoped that this technology will allow experts to obtain a view inside the reactors at the Fukushima Daiichi Nuclear Power Station (NPS).

The measuring equipment uses a technique called the “muon transmission method,” which is being developed by IRID in partnership with the High Energy Accelerator Research Organization (KEK).

The team at KEK has painstakingly combined over 1,200 optical fibers for wavelength conversion in the creation of the measuring equipment, a process that began in December last year. These optical fibers light up when muons come into contact with them; by accumulating data on the number of particles measured after muons pass through high density material, the location and shape of nuclear fuel can be identified.

International experts were invited to take part in the Muon Subcommittee Meeting on January 15-16, 2015. They inspected the measuring equipment housed inside a steel box with shielding walls 10cm thick (in order to protect the equipment from surrounding radiation) and offered various points of advice.

IRID will be transporting the measuring equipment to Fukushima in late January 2015, and plans to commence measurements at Unit 1 at the Fukushima Daiichi NPS as early as the start of February.

It is expected that it will take at least one month to obtain measurement results. The data collected is hoped to reveal the location and amount of fuel debris still inside the reactor – a key process towards the next step of actual debris removal.