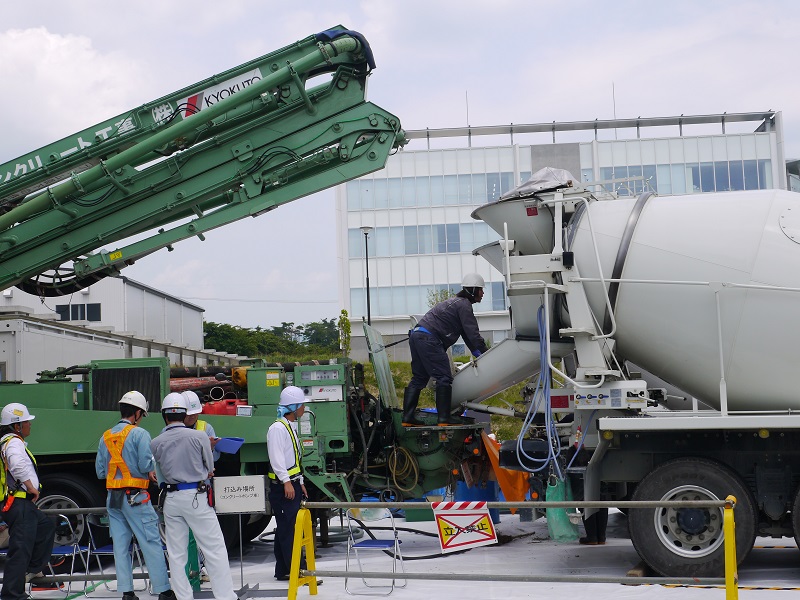 IRID is engaged in the ongoing development of technology for repairing leakage points in Primary Containment Vessels (PCVs), under a project sponsored by the Ministry of Economy, Trade and Industry (METI) for the FY 2016–2017 period, aimed at the decommissioning of the Fukushima Daiichi Nuclear Power Station (NPS). As part of this project, IRID conducted tests to stop water leakage in the suppression chamber (S/C) by injecting concrete.

Testing overview [Water stoppage technology by filling in the S/C]
This research is intended to stop water leakage at the piping ends (quencher*1 and strainer*2) used as a channel connecting inside/outside the S/C, and damaged parts of the S/C (assumed to be below φ50 mm), for fuel debris retrieval. Additionally, we are studying a backup method to stop water by injecting concrete in the downcomer*3 and vacuum breaker*4.

*1: Exhausting the steam accumulated in the Reactor Pressure Vessel (RPV) into the S/C in case of an accident to reduce pressure in the RPV. The piping end connecting the S/C is T-shaped, which is submerged. The surfaces of the pipes have numerous holes, and the steam exhausted from the holes is subdivided and then liquefied.
*2: A metal net installed on the emergency core cooling system pump opening into the S/C pool to prevent damage to the pump from due to sucking sludge, etc.
*3: Generally, the piping section and the flow channel to cause downflow.
*4: Equipment that easily drains the liquid accumulated inside by automatically admitting air, and is installed to prevent damage caused by relieving pressure in the piping and equipment.
*5: Connecting piping that takes vapor generated within the Drywell to the S/C in case of a reactor pipe breakage. Eight vent pipes are installed in the PCV of Units 1-3 at the Fukushima Daiichi NPS.

The workability verification test and concrete injecting test will be conducted for each technology. A series of full-scale tests for development of construction methods are planned for completion by the end of this fiscal year.

*We expect to provide updates on the status of these tests when the test schedule is confirmed.