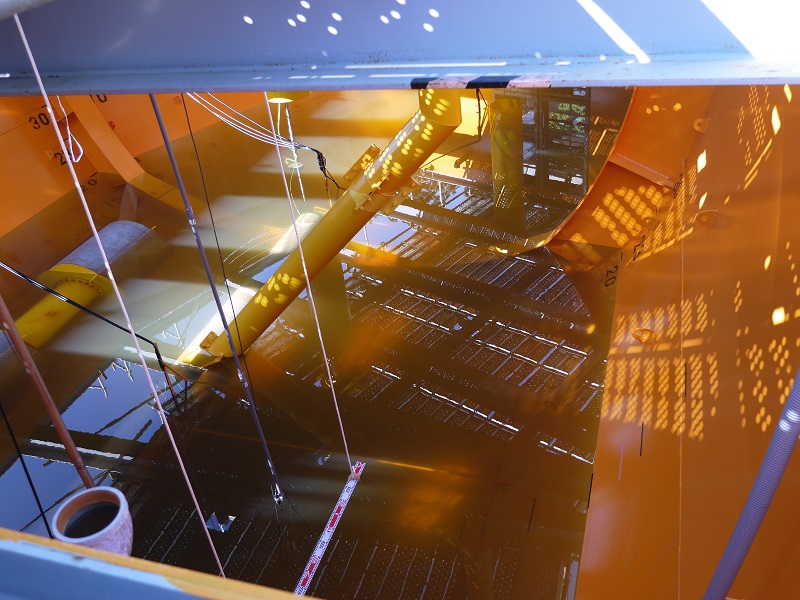 IRID is advancing the development of repair technology for water leakage sections in the Primary Containment Vessel (PCV) under a project led by Ministry of Economy, Trade and Industry (METI) in FY 2016-FY 2017 towards the decommissioning of the Fukushima Daiichi Nuclear Power Station (NPS). As a part of this project, a method of injecting concrete to repair water leakage points inside suppression chamber (S/C), a structure that lies at the lower part of the PCV, is currently being examined.

To test this method, concrete was injected into a full-scale mock-up of the S/C.

・ Testing Overview
Based on the actual structure found in Fukushima Daiichi NPS Unit 2, internal components such as a full-scale quencher and strainer were placed in a water tank that models the lower half of a circler shape placed at 45 degrees. In addition, holes were created to simulate actual damage conditions. Underwater inseparable concrete was injected into this facility to confirm long-distance concrete fluidity, concrete behavior that exceeds stiffening rings, water leak blockage conditions inside components, and if holes in the structure had been repaired.

[Future Developments]
Based on the test results, IRID will perform similar water leak blockage tests through injecting filling inside S/C, using the full scale mock-up facility at Naraha Remote Technology Development Center.
*We expect to post an update accordingly when the test details are confirmed.